The subtle way of being bitchy: Emily Post style

Hey, I was just thinking, did I ever tell you about the time I gave Emily Post's book, Etiquette, as a wedding gift?  I haven't?  Well, sit right down honey, grab a cup of joe and listen up cause it's a good one.

Let me begin in saying that normally I am not a total asshole and do things like this.  Generally speaking, I give people a chance, the benefit of the doubt.  I am honest when I say that not only did I do it in a spiteful, snarky, gentle nudging kind of way, but that many people that knew the bride thought that I was totally justified in my actions and actually supported the idea.  They just weren't brave enough to be THAT bitch that gives a book of etiquette to a new bride.

While Jake and I were still dating, a very good friend of his was getting married.   Jake and I were planning a June wedding and this friend's wedding was actually a few months before.  Jake was the best man in the wedding and had known this fella for many, many years.  I had no complaints with his friend, we'll call him "Steve".  Steve was funny, the life of the party and could be anyone's friend.  A really great guy with a fun sense of humor.  Steve met, let's call her "Crazy," shortly after Jake and I began dating.  Like I said, I give everyone a chance when I meet them.  I am usually a pretty good judge of character and I will admit that after I met her, there was something that didn't sit right with me.  I couldn't put my finger on it at the time, but I knew that there was something that I didn't like about her.  She came on really strong, seemed a bit of an attention whore and overall immature.  While we were all still in our early 20's, she acted much like a catty, snobby 16 yr-old high school girl with a trust fund.   Although, she came from a typical middle income family, she really gave off this aurora that she was better than you and her shit didn't stink.

Needless to say, Steve was in love with her and they dated for about a year before he proposed.  In the mean time, I tried to avoid social interaction with her as much as I could.  I avoided her like the plague.  She became very possessive of him and he came around less and less.  He wasn't allowed to hang out with his friends like he used to.  She gave him an "allowance" with his own money, she checked his cell phone for unknown numbers, although he never would have cheated on her.  In a short amount of time, she proved to have invented a new strain of crazy and no matter what people said, Steve still loved her and wanted to marry her.

So as the time came closer to the wedding day, since my husband was the best man, we were forced to listen to Crazy's incessant bragging about how much better their wedding was going to be than ours.  (I shit you not.)   We hung out with them several times prior to the wedding and I simply smiled and about ground my teeth to a bloody stump trying not to tell her how I really felt about her.   She even baited the conversations with things like, "Oh, have you gotten a DJ yet?"

Crazy- "Well, we got this (tra-la-la) DJ and it cost like $1000, blah blah blah, it's so expensive, blah, blah, blah, but I will spend whatever it takes for a perfect wedding. Blah blah blah.  Did you find a photographer yet?"

Me- "Yes, a friend of a friend is going to take pictures.  We just wanted something pretty simple."

Crazy-  "Well, we got (so and so locally famous photographer) because he's a friend of my uncle's cousins boyfriend.  Yeah, he cut us a pretty sweet deal, blah blah blah.   Did you book a honeymoon yet?"

Me-  "YES!  I can't wait!  We're going to the Bahamas for a week!" ( I was especially proud of this because neither one of us had ever been anywhere tropical, not to mention an all inclusive resort for a week! Drinks included! And when you're 22 yrs old that is some pretty serious shit!)

Crazy- "Well, we are going to Puerto Vallarta for a week.  yeah, my family is from Mexico and super rich (in Mexico maybe, but in the U.S. her family lived in low end subsidized housing, whatev)  and they are putting us up in (XYZ) resort.  They might even have a parade or something like that waiting for us when we get there!"  (I totally didn't make that shit up.)

So you get the point, she was totally a douche bag.  She obviously had something to prove to herself by bashing my wedding plans and shining a huge spotlight on her plans.  It got to the point that the thought of seeing her in a social atmosphere made me cringe on the insides.  Jake knew how I felt, but we were obligated to smile and bear it. One time, while we were all out to dinner with other friends, she took her bra off at the table. At Chili's.  I'm not kidding. Classy.

So as the wedding quickly approached, I thought about how utterly tacky, uncouth and rude she was about the whole wedding thing.  I decided that she was definitely this way because she had never been properly taught how to act (benefit of the doubt).  So maybe I should be a good citizen and provide her with an equal opportunity to be taught how to act like a civil individual, not a total tool bag full of loose screws.  While talking to a few co-workers about how awfully she behaved, someone said "Sounds like she needs to read Emily Post's book of Etiquette."

Hot damn!  What a great idea!  I'll buy Emily Post's book, wrap it up anonymously, and leave it on the gift table!  GENIUS! 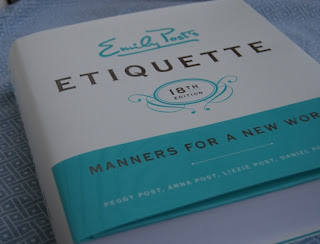 My co-workers thought I was kidding and Jake thought it was absolutely amazing!  So the week of the wedding, I went out, bought a set of dishes off their regular wedding registry and Emily Post's book of Etiquette, that was definitely not on the registry.  I wrapped the dishes in a pretty wedding paper and then realized that if I wrapped the book in the same paper, they may figure out who it was from.  Hmmmmm.  I worked at a flower shop and we had this floral wrapping paper for gift wrapping, "That'll work," I thought.  She'll never know it was from me.

So with presents wrapped, armed with inner self-affirmation that I was doing the right thing, we went to the wedding.  Let me say for the record, even though our wedding was obviously not as high dollar as theirs, it was definitely a much more classy, beautiful affair.

The best part of the whole day wasn't the fact that I snuck a book of etiquette to the classless, rude, tacky bride, but that Jake's best man speech was flubbed up with "I'm so happy that you two have found each other.  I wish you the world of happiness for however long it lasts.......I mean, happiness forever."  He was very sick with the flu and doped up on Nyquil and pain meds, but it was the highlight of the wedding!

Not to mention, when Jake and I arrived at the reception hall first, strategically so I could place the anonymously wrapped gift on the gift table, we noticed that the tacky wedding cake with the two sets of stairs, you know the type with little bridesmaids and groomsmen walking up the stairs, had a little groom that had fallen face down in the cake.  I'm being 100% honest!  I couldn't make these things up.  It was so hilarious that we took a picture and if I tried hard enough, I could find it and show you!

Fast forward about two years...they were divorced.  Finally, we were all free of Crazy and we could have our friend back!

Fast forward another eight years...I tell Steve what I did.  Yes, I lived with that secret for almost ten years.  Well, Jake knew, my co-workers and handful of friends knew.  Ok, I'll be honest, mostly everyone except Steve knew, but whatever, I came clean.  The best was the conversation that led up to the confession.

Steve, Jake and I talking about Crazy one night:

Steve- "Yeah she was nuts! Why didn't you tell me?"

Me- "Do you remember getting any strange wedding gifts?"

Steve-  thinking...."Yeah, I remember there was a book or something."

Me- "That was me.  I gave her a book about etiquette"

I think Emily Post would be proud of my endeavors to better our society, don't you?