It's been a whirlwind week, again.  This week was full of eating, theatre, art with glue and cereal, dog videos and cleaning.  Let me give you the rundown.

Monday was the first day that my student teacher was in the classroom full time and I have to say that she pretty much rocks socks.  She is a real go-getter and the kids love her.  We made some fabulous plans for this week and next and I can't wait to see her in teaching action.

For Luci's 5th birthday present, I got her tickets to see Beauty and the Beast at the theatre.  (Yes, we are very fancy and take our 5 yr old to the theatre.)
My rockin' student teacher and I have been teaching a weather unit and we had the kiddos bring in cereal, pasta, candy, pretzels, etc for a "Cloudy with a Chance of Meatballs" art project. I was really excited about this and the kids have such great imaginations. I just gave them each a big piece of construction paper and they first drew their city and then glued on their food items (raining) down on the city.
Friday was a half day for the students and meetings in the afternoon for the staff. I, of course, got in trouble for talking too much, but I'm used to it. There was a good amount of time for planning with our grade level partners, so that was good. Friday was super exciting at home. I fell asleep on the couch and woke up at 5:30 (shit) with no dinner planned, so we ate hot dogs and mac & cheese.


The rest of the weekend was amazing with the exception of Saturday being woke up at 5:45 to the 5 yr old flipping on the light. As I hissed, screamed and cussed the light of day, she quickly turned it off and ran away. I got to fall back asleep and an hour later that same 5 yr old ninja crept into my room and pounced right onto my lifeless body. I was having a really great dream and the next thing I know, my legs are bearing the weight of a 45lb beast. I decided to give in and get up. With weary eyes I loaded the Keurig and prayed for the best. This was not the way I wanted to start my three day weekend. (Thanks for everything Dr. King, not just days off.) Shortly after the coffee was entering my system Jake showed me the funniest dog video ever! You can watch it here and thank me later.


We laid around, watched cartoons, checked our Facebook, did a shit ton of pinning on Pinterest and then decided to clean. Jake got a hair up his butt that we needed to deep clean the bedroom, dust and vacuum. The kids are really good at dusting and Ivan can run a mean vacuum, so they did that while Jake and I cleaned the bedroom. (To be honest, I would have rather continued my couch marathon, but I felt obligated to help.)
After the cleaning marathon, I sat for the rest of the afternoon and felt pretty guilty about it at about 3:30. With no plans to speak off, I asked Jake if we should invite some friends over, so we called up our good friends S & L. They were in the same boat with the no-plans-on-a-Saturday-night-and-we've-got-kids, so they came over. We ordered pizza, drank adult beverages while the kids played and laughed our asses off. I love like minded people. 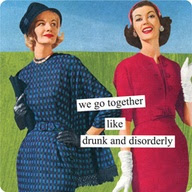 Sunday came too early and it also involved more Pinterest, cleaning, laundry, movies on the couch and cooking. Don't get too jealous of my decadent lifestyle people, I really live life in the fast lane, I tell ya! I did make some awesome dinner which some may call tater tot casserole, but our family calls Lazy Bitch casserole, but it takes little to no effort at all. (The kids don't call it that, but wouldn't it be hilarious if they did!) It's really just a layer of frozen tater tots, American sliced cheese, cooked ground beef, more tots, and topped with shredded cheese. Bake at 350 for about an hour. Really easy, especially when you are lazy.

This morning we had to go the hospital for Ivan's blood work and so that was an inspiration to actually shower, get dressed and put shoes on before noon. Since I knew we would be leaving the house, I went ahead and planned meals, took inventory in the fridge and made a shopping list. After we went to the hospital and blood work was done, it was only 9:00, so I decided that we should go to my classroom to get a little work done. The kids weren't being extremely annoying and were getting along quite well, so I figured what the hell. We worked there for about 3 hours.

I have been determined to reorganize the class library, which includes approx. 1.5 million books,(not really) so I printed and laminated new labels for my bins this week. I sorted, labeled and organized while the kids destroyed, colored and messed up my puzzles and games. I also bought some Rubbermaid tubs to organize monthly items like books, art projects and class games. It took a while but I will say it looks a lot better. Now if the 21 eight yr olds don't destroy it, we'll be doing great.

We then preceded to go to lunch, grocery shop and return home so I could get all Rachel Ray up in here. Well, let me tell you that she's got nothin' on this girl. Whilst all the pinning was going on this weekend, I found some really awesome recipes. I decided a while ago that I didn't want to be one of those people that pins a bazillion things and never does any of them, so I picked a salad and soup that I could make for dinner tonight. They both turned out ah-mazing!
The soup was a broccoli cheese soup that was no less than a feat of grandeur. The recipe came from here and I followed it exactly as listed. The salad was from here and I did make a few major changes to it. I followed the recipe for the chicken mix but I didn't add the dressing and mixed items to the salad. I thought the salad would get mushy so I left the mixed greens in a separate bowl. While I was making it, I kept thinking that this would much more awesome as a wrap, so clever me, I got out the garden veggie green wrap that I bought today and slapped some mixed greens on it and topped it with the dressing/chicken/veggie mix.

So there you have it!  I look forward to the rest of week, mainly because my student teacher and I have some fun plans for the week and I took Friday off so I can go to the doctor and finally get my eyes checked.  Maybe I'll be able to see again!?  Also, Saturday night my boyfriend, Adam Levine, is hosting Saturday Night Live and we're super excited about that!  Hope your weekend was as exciting and relaxing as ours! 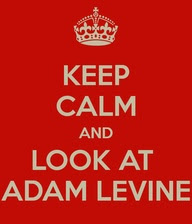