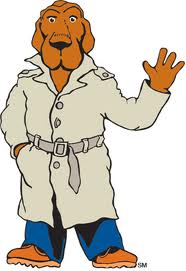 While perusing my old MySpace profile ( yes I still have one and no I don't use it)  I found this uber-funny blog that I posted about 5 years ago.  Although it happened ages ago, it's still as funny today and as it was then.  ENJOY!

Ok so you can call me McGruff the crime fighter. There was some serious Bartontucky drama last night in the hood.


Our story begins with Jake and I standing outside and talking about God knows what, when my eyes focus in on a young white kid walking down the street. But he wasn't just walking, he was scoping the hood; definitely a shady character. So I watched him, as I stood in the dark shadows of the night, as any good super hero would. He walked towards my neighbors car and just as he was going to try opening the passenger side door, a car drove by and scared him. He went up into the yard as if to go into the Colona Mansion. As the car went by, he proceeded back to the cars. He tried opening the passenger side doors to two trucks and then the car that was unlocked he opened and the dome light came on. I saw him lean inside and start sifting through the contents. At that point, I sprung into pro-active mode. This is BULLSHIT!!! Some little punk is not about to steal crap in my neighbors car!


Jake ran in and called the cops. As Jake was inside on the phone, I watched some more, the kid proceeded to the next truck and reached in it sifting through the contents. Then he kinda disappeared for a bit and that when I saw him in MY DRIVEWAY!! HELL NO! Our motion light came on at that point and scared him. He ducked down under the cars, but still didn't realize that he was being watched. At that point all adrenaline  kicked in. I yelled "HEY WHAT ARE YOU DOING?!" He looked shocked and surprised and walked toward me and said as he stumbled on his words "UH UH I was looking for a cat" As we walked bewildered across my yard and through the neighbors bushes, I cleverly replied, "Yeah in someones car?" At that exact moment the cops rolled up and caught him.  I sure did think he was gonna take off running but he didn't.


Anyways, the cop interviewed Jake and I and wrote down all of our info. I sat on my front steps the whole time they interrogated the kid. He denied it all the way saying he was looking for a cat. Denying the fact that he was opening cars. We notified the neighbors and no one was missing anything. My one neighbor said though if the kid would have tried the driver side of the truck, he had a MP3 player sitting in the front eat.

I got to hear them read the kid his rights, which is something I have never experienced first hand. I felt like a nark on one hand and a super citizen on the other. The cop thanked me and Jake for calling because this kid had been in trouble before for burglary and this could have been a spree that would have resulted in a huge loss of property. So the cops said "On behalf of me and who ever is working first shift tomorrow, thank you"


Wow, you just never know when I might have to fight the forces of evil again. Look out villains McTharp is on the look out!