Well here I go again fully locked and loaded to blog about something that irritates me to no end. I am a generally positive person, really I am.  I just can't understand people though.  Here it goes:

Jake and I went out for a really lovely dinner last night at a local Italian place.  It is a very small restaurant and when I say small, I mean less than 1,000 sq ft.  Being such a small restaurant makes it much more quaint and intimate, however, it also makes it very cramped, especially on a Friday night.

We got there around 7pm and it was fairly busy when we entered.  There is literally no waiting area and so when you walk in the door you are in the dining room.  We got a table right away with no problems, thankfully, because it would have been awkward standing in the dining room waiting for a table to clear.


We were seated, drinks and appetizers ordered when a group of three people sat down next to us. We were in a booth/chair table, which meant that the table next to us was really NEXT to us because the booth was adjoining to our table.  The group next to us consisted of what seemed to be a middle aged dad, wife and college aged daughter.

Here's were the annoyance starts.  You know those annoying people that think because they have a cell phone that they should use it whenever and whereever and it makes them feel special?  Well, he sat next to us at dinner.  You know, they look at it constantly, checking their facebook or text messages.  They may even check it when they know that nothing has changed since they checked it 2 minutes ago.  But they feel important, special, and different from the crowd because they have a secret conversation going on that no one in the room is part of.  The problem is, and I'm just gonna say it, WE DON'T CARE! 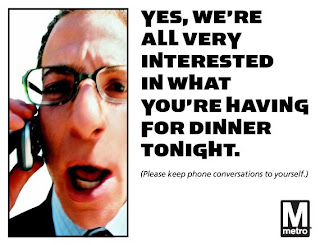 I don't care that you need to make yourself feel secure in a social environment by using a cell phone as a false sense of social standing.  I don't care that you went to Target today and got a pair of shoes on sale or your kid won his soccer game or that your mom is drinking again.  These are not things that need to be discussed while in the company of strangers in public.  You know this guy right?  He/she talks on the phone through the entire grocery shopping trip, at the library, in the bathroom (!), in line at the DMV, etc.  You get the picture.

I realize that we live in a technology driven, instant communication age but some things should be considered whilst yapping on the phone.

1)  Consider your audience that is in close proximity.  (I was once in line at Kohl's and heard a guy talking to his friend on the phone.  He described in detail a girl he had been with.  Classless trash.)

2)  Consider if your conversation will bother others.


3)  If your conversation is of a private and/or embarrassing nature, talk later while you're alone.  I don't want to accidentally overhear that your sister in law got arrested.
4)  Please talk in a volume that is pleasing to others.  Don't be the guy that yells and guffaws into the phone over a quiet dinner. Likewise, steer clear of loud, obnoxious ring tones that might go off at inappropriate times.  If you do choose to have one of those, know when to turn it down at the right moments.

My frustration with "important phone talkers" began when I worked at the flower shop.  These types would come in talking on their cell phone while shopping around the store. I always felt uncomfortable being present while someone was talking on the phone so I would find something else to do while they talked.  It would really irritate me when the second they were off the phone, they would be flustered because I wasn't right there waiting to take their orders.  Excuse me, but I think it's rude to stand and listen (or pretend that you're not) while a customer is on the phone, so don't get pissed if I find something else to do while you polish off the gossip about your best friend's divorce.

I will be the first person to say that I'm not real 'hip' with cell phones and texting and in fact I really don't like it.  I think it's cool to have a fun ring tone and cute pictures on my phone but as far as cell phone etiquette, I see lots of rude offenders.

So back to the story.... the guy next to us checked his phone, texted and re-checked all through dinner.  He was also a loud talker and what Jake and I call a 'tool bag'.  He was a know-it-all and very opinionated about everything.  He irritated me so bad that I almost want to text him and tell him to Shut the Hell Up!

What really brought this whole rant about was that as the restaurant got busier as we sat, the bar slowly filled up with middle aged people with cell phones attached to their hands.  I noticed and pointed out to Jake that the cell phone has become this thing that will fill some kind of void.  It substitutes uncomfortable silence, being alone somewhere and not wanting to being alone, or social interaction all together.  (I just wonder if there have been any social psychology studies done on this topic?)

As I watched the nameless check, text and re-check their phones as they stood at the bar, I felt sorry for them.  I wondered if they were lonely.  I wondered if they were able to fully appreciate the atmosphere of this adorable Italian restaurant, the hand painted walls, the low lighting, the wine cellar along the wall, the soft music playing.  I wondered these things because as they checked, texted, and rechecked, I was taking in my surroundings.  I felt sorry for them that they were so engrossed in whatever was going on in the their phone that they failed to enjoy what was right in front of them...this great evening with a pulsing atmosphere.

I have seen this situation before last night.  I see people in movie theaters, doctors offices, bars, college classes, etc.  I just have to wonder what is the big deal with the phone?  You can only recheck the same text that you already looked at so many times before you realize how lame it really is.  Is checking and rechecking worth the sacrifice of face-to-face interaction  with real people?

So after all this being said, you will not believe what Dalai Dad did today!  He went and got new phones for him and I.