﻿
﻿﻿﻿﻿﻿So, as long as I have been blogging, I have rarely mentioned my beloved, four legged friends, Winston and Phoebe.  Winston, my distinguished Yorkshire Terrier would say "How incredibly rude!"  Well, let me introduce you to my two furry friends.
﻿
﻿Phoebe is a 12 year old Sheltie mix of some sort.  Phoebe and I have been together longer than Jake and I.  She has been my partner in crime through many ups and downs of life.  Our relationship began when a relationship ended many years ago.  My boyfriend had just dumped me and I felt very....alone, I guess.  So I did what any lonely, sad woman would do.  I went to the pound.  After searching through hundreds of yipping dogs, I saw Phoebe.  She was the most hyper dog in the kennel and the most adorable.  She was only a few months old and a big ball of furry fluff.  She was all white with one blue eye and one brown eye.  She looked like a stuffed animal that ran and played.  We became instant friends and she has remained by my side since.  She has a very distinct personality and comes with many quirks.  She is terrified of thunderstorms and will pee if the pressure drops too quickly.  We call her our little barometer.  Although she is now 12, she is spry for her age.  She enjoys getting in the garbage and guarding the food dish.  She likes to over power Winston and loves to be snuggled and given all of your attention.

﻿
﻿﻿﻿Winston is our baby dog who just had a birthday a few months ago.  We got Winston last Christmas and he is my baby.  As I write he is sound asleep on my lap, cuddled up under my blanket.  He is a Yorkie and is proud to prove it.  He desperately wants to be big and wants you to believe that he is tough.  (But he's not.)  He loves to antagonize Phoebe but usually gets his butt kicked.  He loves the kids and loves to play with them.

Phoebe likes to think that she is a small lap dog too.  Lately, she likes sleeping in Winston's bed, even though her pillow is three times bigger.   Winston, though, will not be having it. 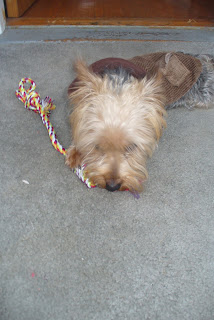 Winston tells his friends that he hates to wear clothes, but really, he secretly loves it.  Just yesterday he asked me about a new puffy coat for winter.  I told him I would see what I could do, but no promises.  He'll pretend to hate it but frolic joyfully in the snow just the same.
Posted by Heather