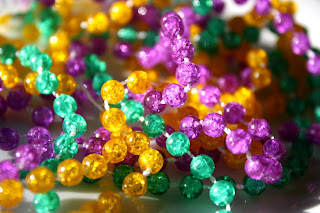 Since today is Mardi Gras, I thought I would entertain you with some memories, or lack thereof from Mardi Gras' past.  I don't mean that lame St. Louis, Chicago or other wannabe town that throws a "Mardi Gras" celebration.  I'm talking about a REAL, shut yo mouth, New Orleans Mardi Gras.

I know, I know.  "You went to REAL Mardi Gras?"  You bet your sweet ass I did!  Grab a chair and maybe a, ahem, drink because the stories I could tell might last for days!

Let me start in saying that this post comes with a fair amount abundance of editing due to the fact that I value my pristine, *cough cough * reputation.

Our story takes place several years ago.  Okay, many years ago, when I was but the tender age of 18.  My bestie and I, we'll call her "ShaNaeNae", had the opportunity to go to New Orleans the weekend before actual Mardi Gras.  I believe that the trip was planned mainly on the fly, as many of our excursions had been.  ShaNaeNae's grandma had a lifelong friend that lived in the French Quarter and grandma went to visit during Mardi Gras every couple years.  This particular year, grandma asked if we would like to tag along.  Both being VERY single, young and without much responsibility to speak of, of course we accepted the challenge.

We left on Friday morning from IL, drove straight through and arrived in the French Quarter late in the evening hours.  The first sights of the French Quarter were amazing, filled with thoughts of awe, wonderment and mischievous delight.  The streets were crowded with people and driving a car down the streets of The Quarter were nearly impossible.  I recall grandma trying to park the car on the street in front of the apartment building and a drunk woman slightly bumping our car with hers.  There was a small altercation and the drunken woman scurried off quickly without incident. So began our Mardi Gras.  Little did I know at the time, but this was just the beginning to a miraculous journey into the abyss of debauchery.

That first night was pretty uneventful and I remember being a little scared of the craziness going on around us.  We settled into our room and I was very impressed with grandma's friend's apartment.  It was very small and tight but very, very cool.  It had a small courtyard on the inside of the building that people had decorated with plants, statues and paintings.  The inside of the apartment was even more impressive with a tight spiral staircase the led up to the bedrooms upstairs.  I, in fact, wondered how they even got the bedroom furniture up the stairs, the spiral was so tight.  SheNaeNae and I shared a spare bedroom and quickly unpacked our things. 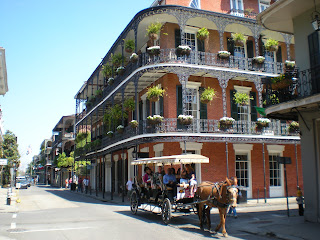 The next morning, we ventured out with grandma and her friend.  They took us to Jackson Square and Cafe du Monde for  beignets.  It was a ubber cool open air restaurant with authentic New Orleans cuisine, but we went straight for the sweet pastries.  We did some shopping, sticking with grandma and her friend.  As magical and amazing The Quarter was, I will be the first to admit that it was also very intimidating.  With it's beautiful architecture, balconies decorated with ironwork and stunning courtyards, The Quarter was also filled with many, many drunken ne'er-do-wells. We felt we should play it safe and just stick with the veteran Mardi Gras grandmas.  They took us to a parade and several shopping areas and that's when we felt it safe enough to split apart from the grammies, in small increments of time, of course.

After meeting up for lunch at the Hard Rock Cafe, we were feeling a little more brave and decided to hit some shops on our own.  Grandma's friend gave us our own key to get back into the apartment building later, so we felt a little better knowing we could come and go as we pleased.  Getting later in the afternoon, we shopped for a while and then ventured down to the waterfront to people watch.  It had become very apparent that as the day wore on, we would encounter more and more strange people and occurrences.

As we sat along the river in a gazebo, sipping our proudly acquired alcoholic beverages*, we laughed at the people we saw.  As we watched and admired cute boys walking by, SheNaeNae noticed a particularly drunken fool stumbling towards us.

"Oh, shit.  Watch this.  This mother (expletive) is about to fall. Watch."  she giggled.

And sure enough, as he stumbled at a too fast pace with his jester hat bouncing in the breeze, his beads upon his neck swinging back and forth, he missed a step to the gazebo and fell flat on his face.  His jester hat flew off his head and his beads were now tangled around his neck.  And instead of offering a helping hand or a kind word of "Are you okay?" his friends pointed, laughed and taunted the poor drunken fool.  SheNaeNae and I couldn't help but laugh at how ridiculous this poor fellow was and we fell over laughing too.  And in the midst of all the confusion, (ahem, cocktails) I somehow managed to set my feather boa on fire.  Trying to put out a fire on a boa while you're wearing it is NOT the easiest thing to do, I tell you.

As we ventured on to discover the rest of the French Quarter, we left the waterfront and continued to the downtown streets of The Quarter.  As we walked, er, stumbled, I noticed a striking young man up ahead.  (Now, if you know me, you know that I have a major crush, admiration or affinity for Jim Morrison.)  As he swaggered closer to us, we were crossing the street going in opposite directions of this beautiful creature, who just happened to look EXACTLY like Jim Morrison.  He was wearing the same black leather pants, belt, white peasant shirt and curly, fly away hair as Jim.  My heart sank and fluttered as he got close enough to see that he was looking right at me.  Walking all by himself, I wondered why, why was this gorgeous man alone!  As we crossed the street and literally right in front us, he looked at me, smiled and muttered, "Well, hello beautiful."

DIED.  I about DIED!  As I gasped and swooned, I had to catch my breath.  As I looked back, he was watching us walk away and all I could do was giggle and hang on my friend, like young 18 year old girls do.  As we walked on, I kept looking back at him and before I knew it, he had disappeared into the crowd.  Now, that's something that will never, ever again in my life happen.  What a memory!

We perused in and out of clothing shops, jewelry stores and voodoo magic shops.  Amazing is the culture of New Orleans.  We soon grew tired of walking, and all the while, the topic of Bourbon Street was looming in our minds.  We retired to the apartment in the late afternoon and ate dinner with the grandmas.

After some time to reflect on the crazy day and rest our tired feet, we decided on going for a walk to see what the nightlife was all about.  On a Saturday Night.  In the French Quarter.  During Mardi Gras.

You can probably guess what we, tender young ladies of Central IL, found.  As we bounced from street to street we made quite the array of drunken friends.  There were the obvious frat boys and sorority girls in town for a fun time.  But there were also groups of nontraditionals, like 30 somethings with their significant other, businessmen, and housewives.  Hell, everyone and their grandma was at Mardi Gras that year! (pun intended)

Acquiring adult beverages was easier that we thought it would be.  At the time, you could easily purchase hurricanes, our beverage of choice, at any one of the hundreds of walk-up bars.  They were literally a walk-up window, think ice cream shack, along the street that didn't ask for ID.  In our "altered state" we had still decided that we would not be going to Bourbon Street.  It was too crowded.  Too many opportunities for disaster.  Too much drunken, craziness.  We simply could NOT venture to Bourbon Street.  Ever. Agreed. Good. 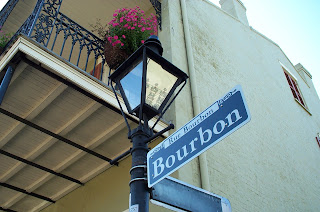 And that is where the story will end.  I have many more memories of that night, but those I will keep quietly to myself.  The following morning, after returning to the apartment around 4am, we left for home at 6am.  Still in "altered state" may I add.  As we pulled away from the curb and pushed our way through the crowed streets of the French Quarter, I was a changed woman.  The things I saw, people I met, and experiences I had, changed my life.  Yes, indeed, those short 48 hours in New Orleans changed how I view humanity.  How giving, friendly and awesome total strangers can be.  We made friends everywhere we went and had many great laughs with complete strangers.

The ride home was a rough one, but I wouldn't have changed a minute of it.  Except, I always wonder what ever happen to "Jim Morrison."

* Don't judge me.  Acquiring alcohol at Mardi Gras when you're 18 is not that hard.  Their culture is based from Europe and Europeans start their youngsters drinking at like 12, right?  So, I'll stick with that.  We were just embracing the European culture.
Posted by Heather