Who or what is a Dalai Mama?

When I set out to start blogging four years ago, I was faced with choosing a name for my blog.  I wanted a name that would embody my beliefs, my thinking and values as a person.

When I was pregnant with my daughter, I had a maternity shirt that said Dalai Mama on the front and it was my favorite shirt, so I picked the name Dalai Mama.  I felt the name and beliefs behind the name encapsulated who I am as a mother, woman and person.

But I am not the only Dalai Mama!  There are so many more writers, bloggers, and mamas out there that refer to themselves as Dalai Mamas.  So, what is a Dalai Mama?

You may be familiar with His Holiness the 14th Dalai Lama.  It is the belief of the Dalai Lama "that his life is guided by three major commitments: the promotion of basic human values or secular ethics in the interest of human happiness, the fostering of inter-religious harmony and the preservation of Tibet's Buddhist culture, a culture of peace and non-violence."

I believe strongly, similarly to the Dalai Lama, that life should be guided by happiness, harmony, peace and non-violence.  In being a Dalai Mama, I have tried to make intentional choices in my parenting, life choices and perspective to live a life of happiness.

I am not saying that I am perfect, in any way, because I've certainly had my own non-zen days!  But in trying to keep things into perspective I have gained a calm and unwavering ability to keep my cool.  I have become more diplomatic in solving problems.  I don't let the negativity of others bring me down.  I see purpose in being kind to everyone, even an unreasonable child.

In keeping with the theme of simplicity, I have created a Dalai Mama Manifesto. 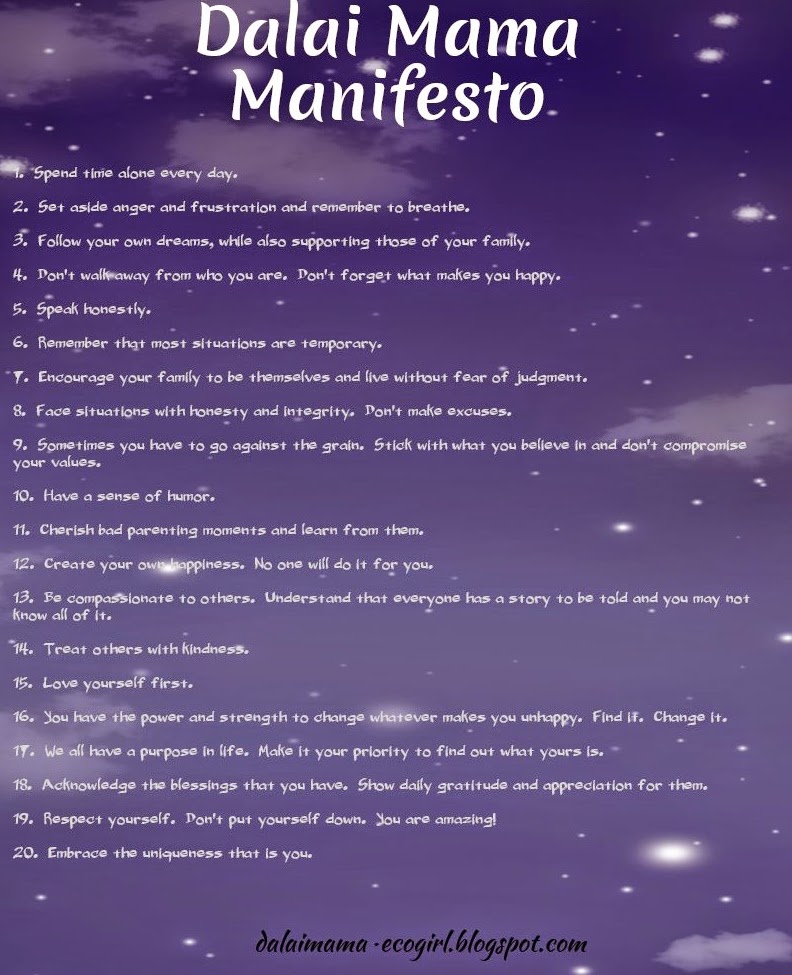