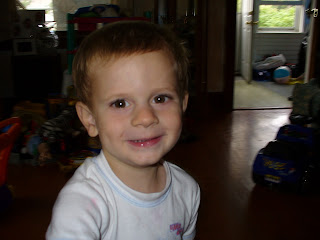 In the moments that would follow, the details get very blurry.  The whole situation is surreal and it still feels like a really horrible nightmare.

I recall Ivan being admitted and Jake coming to my side.  I remember the doctors hovering around Ivan trying to figure out what to do first.

They conducted loads of tests, x-rays and echo cardiograms.  The day turned into night and I stayed by Ivan's side not knowing when we would get called in to see a doctor.

The doctors and nurses were so wonderful in the midst of it all.  The nurses made sure I ate and kept the room comfortable for us.

The next day, March 2, was a lot of waiting, testing and more waiting.  Ivan grew very frustrated with being in a hospital bed and not being able to eat much.  He was starving and all we could give him was several ounces of formula at a time.  The doctors didn't want to put too much into his stomach since he was bleeding internally.  In fact, at one point he was so mad at the nurse and my mom that he couldn't have more formula that he threw the bottle at them, which is very unlike him.

That afternoon, we finally met the surgeon and team that would be performing the surgery to save Ivan's life.  The doctors explained that the heart valve was deformed and not working at the pace it needed to.  Our family listened attentively and asked questions.  The doctor went on to explain that Ivan would need a mechanical heart valve.

The heart valve would be large enough to last until he was probably 6 or 7 years old and would need to be replaced as he grew.  In addition, patients with mechanical heart valves have to take blood thinning medicine daily to prevent blood clots that can form on the valve.  This obviously would pose a threat of stroke if a clot formed and broke off the valve.

Being told that my 8 month old baby would have to have a mechanical heart valve was enough to deal with let alone that he would need to have several more surgeries as he grew.

I felt my heart sink into my chest and I fought back the tears as I held my husband's hand.  We asked all the possible questions that one can think of when being confronted with this type of news.

Would he live a normal life?

Would be able to go to school?

Would he be able to enjoy normal activity?

And then in the pit of my stomach, I felt a question that I wanted to ask but I was scared to hear the answer.  Finally, as the doctor explained the procedure and asked if we had any final questions, I gathered the nerve to ask.

What are his chances for survival?

No mother ever wants to ask this question and you certainly don't want to hear the answer but I had to.

I think of myself as a very logical person and right now my heart couldn't handle anymore what-if's.  I needed something concrete, something logical and mathematical to tame my fears.

The doctor thought and took a deep breath and answered that the chances were fairly good and he should have about a 95-90% chance of survival.  I let out a blast of air as if I had been holding my breath underwater for two days.

I felt relief.  I felt peaceful and hopeful.  I put all the trust I could ever have into this doctor's able hands.  The same hands that would save my baby's life.

And so it was, that Ivan was scheduled to have this surgery the next day, March 3, 2005.  That evening the nurses gave Ivan a sedative that would help him relax and sleep.  They urged Jake and I to go home and get some sleep because the next day would be a long one.

After much deliberation, we relented and kissed Ivan good night and went home.  We drove a silent ride home and very little was spoken.  I think we were both in such shock that, for once, neither one of us had anything to say.

We got home around 10pm and settled into a zombie like routine, just going through the motions.  I was so numb that I don't remember much of what happened until the phone rang.

The nurse on the other end spoke with urgency and concern.

"We have some concerns.  Ivan's blood work came back very abnormal.  The liver function tests showed that something is not right."

How could my baby have meningitis or hepatitis?

Something had to be done!  They couldn't postpone the surgery!  He needed to be fixed right now!

As I cried and sobbed into the phone, I asked the nurse, "So, you're telling me that while we are trying to figure out what is wrong with his liver, we will postponed his heart surgery?  So, what happens if his heart stops working in the mean time?"

She had very little comfort, empathy, or answers to give me.  She said she was sorry and they were doing everything they could to figure this out.  I hung up the phone and lost all the strength, hope, and relief that I had in these last two days of roller coaster emotions.

I fell to the floor in Ivan's nursery and cried from the depths of my soul.  I cried into my hands and thought WHY?!?!

Why did this have to happen to him?

Why couldn't he be safe and healthy and home in my arms?

Why can't I help fix this?

My mind raced with thoughts of sorrow and loss.  I started to grieve.  The thought of losing him ripped through me and filled my whole body with pain.

Just 8 months ago I had given birth to this perfect, beautiful baby and now I may be losing him.  I felt angry.

I was angry with the general practitioner that told me he was only experiencing the flu and gave me suppositories for his vomiting.

I was angry that I hadn't listened to my gut instinct that something was wrong with my baby.

I was angry with God for letting this happen.

I sat for a long time in Ivan's nursery looking at his things, smelling his sweet smell and looking at his pictures.  As I sat and looked around his room, I thought of losing him and having to return home to an empty room.  I wept as I thought about what I would do with all his things.

Sadness and sorrow overcame me as my baby lay in a hospital bed dying while the doctors ran tests and tried to help him.  I couldn't get the thoughts of losing him out of my mind and I needed to shake it.

I went to the camcorder and got out a video I had made just a month earlier and watched it.  It was soothing to see him smiling and laughing.  I felt hopeful that nothing that beautiful could be taken from this Earth so soon.  I felt at peace in knowing that everything would be ok.

That night I don't think I slept and we were back at the hospital by 5am.  When we rounded the corner to Ivan's room, I noticed a flood of doctors, nurses and residents.  When we entered the room I was greeted by the surgeon that we spoke with the day before.  Ivan was sleeping and hooked up to so many wires and drips that I lost count.

The surgeon told me that after more tests, they concluded that the liver function wasn't because of meningitis or hepatitis but that it was a direct cause of the heart malfunction.  With that said, they decided to give him some proteins that would simulate the liver function that he was lacking and they would be able to carry on with the surgery that day.

I gasped and held my hands on my face and cried a cry of relief.  I felt the hope, trust and belief flooding back in.  The doctors and nurses quickly prepared Ivan for his surgery since it would be a 14-16 hour ordeal.  They would need to get started right away.

And just like that, they wheeled my baby away.  Hooked up to tubes and monitors, he rolled down the hallway covered in my hopes, faith and trust in those doctors.

It was a long wait and even longer day.  Family and friends came and went and I envied them.  I envied that they would come and drop off food, but go home to the one's they loved and hold them.  I feared that I may never hold, touch, hug or kiss Ivan ever again.  I feared that the last memory he would have of me was him throwing a bottle at me because he couldn't have any more.

A chaplain from the hospital came frequently and gave us updates on the progress of the surgery.  Every time I saw him my heart sank and I worried that the news wouldn't be good.  But every time he came, he had something good to tell me.

Around 9pm that night, the surgeon gathered our family in the conference room.  With a big ball of nerves we sat down and he told us how it went.  He explained that the surgery went better than they could have ever expected and he would be just fine.  The heart valve that they replaced was badly deformed and was hardly working at all.  The new valve, however, was working wonderful and he now had a strong, healthy heart.

Relief swam through me and I felt, for the first time in a month, that my baby was going to be ok.  He was fixed and would be back to normal very soon.  I knew the road that lay ahead was going to be rocky but the fact was that Ivan was still here and he was going to be fine.


When Jake and I walked into his room several hours later, after the doctor had given us the ok, I was startled at first.  Ivan lay in the bed lifeless and limp.  He was sedated and had about 13 different tubes coming from him.  He had a ventilator, a tube in his nose and several drainage tubes.


A nurse came in to check on us and asked how we were doing.  I wept as I looked at my boy, lifeless and limp.  She touched my shoulder and asked if I was ok.  I nodded.  She asked if it was upsetting me to see him this way.  I will never in a million years forget what I said to her.