Sorry, it's been a while.  It's been a super busy couple of weeks at school.  We had conferences, St. Patricks Day and syrup Fridays to deal with and quite frankly, I've been tired.
Although, it has been a rather productive couple of weeks.  Just look at all the fun stuff we did in second grade last week!

As a family project, the kids made leprechaun traps at home with their families.  I must admit that they were very creative and I was thoroughly impressed by the effort that put into it!  The kids all got a chance to demonstrate how their trap worked and then I set all the traps out so the kids could walk around and see them up close and  see how they worked.  I have a bunch more cool pictures but they have students in them.  (And they frown upon posting students' pictures these days.)  So here are the traps as a whole. 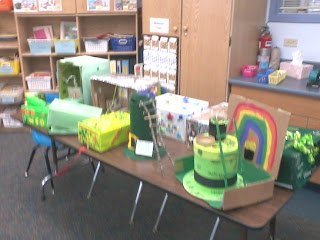 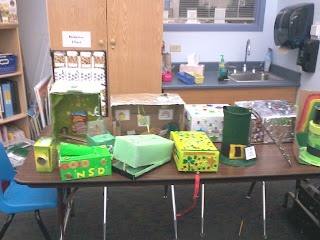 There were several of the standard, box-with-a-stick-and-a-string, but some got REALLY creative with it... 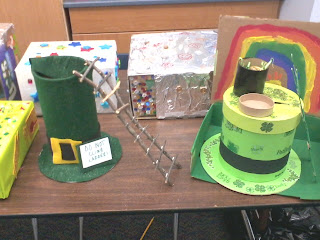 And in a moment of pure insanity, on Friday (aka syrup day) I decided that since the kids would be so spun on the sugar highs that we should definitely paint.  Duh? Made sense at the time!  So we made ladybugs out of paper plates that are now suspended from my classroom ceiling. 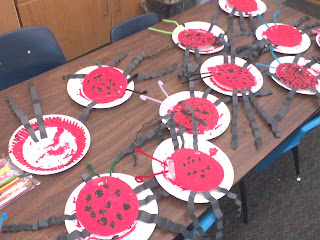 So, overall it was a frantic week getting everything ready for conferences but in the end, who doesn't want to wrap up a crazy week with some red paint and googly eyes??
Posted by Heather