A For-Real Conversation That I Heard at Target

I was at Target yesterday doing my weekly rounds when I heard a conversation that was the epitome of the Target marketing suction that gets you to spend way too much time and money in that place.  Luci and I were browsing the Dollar Spot, looking for something to waste her only dollar on, when two 20-something ladies came strolling over.

They were both sporting the standard mom uniform and acceptable Target attire: yoga pants, hair in a messy bun, Starbucks in hand, tired t-shirt with what looked like a little spit up on the shoulder.  They came swaggering over to the Dollar isle with that I-can't-believe-I-got-out-of-the-house-without-the-kids look in their eyes.  That glazed-eyed look of wanderlust.  That giddy excitement of anticipation and longing.  You know that look.

They almost made it past the Spot without a single purchase (I noted that they weren't even carrying a basket or pushing a cart.  Either they were amateurs or in total denial) when the brunette of the duet turned sharp on her heels and pronounced, "Oh, hold up a minute!  They have Charleston Chews!  I love Charleston Chews!"

She quickly shuffled over to the candy section of the Spot and scooped up a Charleston Chew.  Her friend followed suit and before they both knew what was happening, they both had a Charleston Chew in hand.  The blond of the duet asked, as she clutched the yellow wrapped candy, "What does it taste like?  I've never had one.  Is it like chocolate?" shrugging her shoulders in a way that told me that it didn't matter the answer, she was going to buy it and try it anyways.

The brunette answered and I didn't hear the reply but I don't think Blondie heard anyways because she was instantly mesmerized by the colorful stationary in the bin next to her.

"Oh, look at these cute post-its!  I need some post-its!" shouted Blondie.  "And they have cute Easter decorations.  I need some of these for my mother in law's house.  I told her I would bring a table decoration.  I could put this (I didn't catch this part, we'll just say... something-something) in a glass bowl with some colorful marbles or something."  (At this point, she is not only getting sucked into the Target Marketing Scheme (TMS)*, but now she's Martha frickin' Stewart. She's got this.)

While Blondie was rummaging through the Easter decorations and post-its, suddenly the brunette snapped out of the hypnosis-induced psychosis of the TMS and announced, "Wait.  I just needed some toilet paper.  Shit, we're going to be here forever, aren't we?  We're gonna be here for two hours, I'll end up spending $200 and I'm not going to get any of my cleaning done today, am I?"

Blondie looked up from the bin holding a Charleston Chew, Easter Bunny head band with white fluffy ears sticking straight up in one hand and a handful of post-it notes in the other.  She blinked her long eyelashes slowly, looking through her glazed eyes at her friend.  She thought for a minute.  After a moment of consideration, denial, anger, humor and at last, acceptance, she smiled and nodded her head.

The friends fiendishly giggled and then continued in their search for just the right Easter decoration something-something.

*TMS (Target Marketing Scheme) is how we will further refer to this syndrome.  Not to be confused with PMS, but TMS has been laboratory proven to reduce the affects of PMS.  That's a fact.  Look it up. 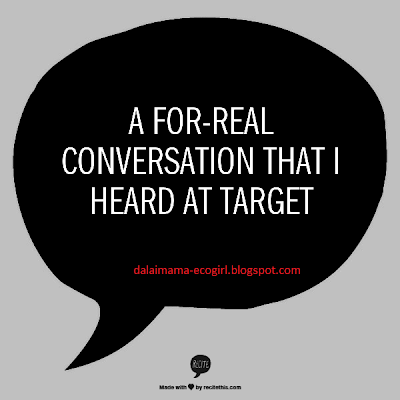 P.S.  If you would like to hear more about my funny, Target shopping episodes read :

Prostitutes in Target:  The Time I Overheard a Craigslist Connection in Target

Blogher Featured post : Christmas Brings Out All the Amateurs

My sister-in-law's attempt/fail at being a professional Target shopper. :  Amateurs Step Aside: A Target Story

I'm pissed off at Target:  Say Something I'm Giving Up on You