Mr. Rogers, We Need You More Than Ever


During his acceptance speech for a Lifetime Achievement Award, presented at the 1997 Emmys, Fred Rogers astounded and humbled the glitzed audience by asking, "Would you just take, along with me, 10 seconds to think of the people who have helped you become who you are? Those who have cared about you and wanted what was best for you in life. I'll watch the time."

At first the audience watched and waited as he carefully checked his watch.  Realizing that he was serious in his request, the audience became silent and as the cameras surveyed the room, you could see misty eyes, smiles and looks of fondness from the audience members.

I'm sure they weren't expecting to reflect upon their childhood in this moment of celebration and paparazzi that was the Emmys.  But, Mr. Rogers had this effect on people.  He had a gentle way of reminding us of what is truly important.

As I think about that very same quote, it makes me happy and sad to think of those people that helped to shape me into the person that I am today; those that are still here and I see on a regular basis and those that are no longer here to see my life's accomplishments and how they impacted my life.  When I think about that quote, I can't help but think of my family, of course, but it's also hard to forget the impact that Mr. Rogers, himself, had on shaping me into...well...a good neighbor.

In my childhood, TV was limited to whatever was on one of the four channels and PBS happened to be one of them.  Mr. Rogers Neighborhood was a staple in my growing up.  Besides Sesame Street and the occasional Saturday Morning Cartoons, it was the only children's programing available at the time.  But, I admit, Mr. Rodgers was always my favorite.

He had a certain honesty, innocence and sincerity about him that I felt I could relate to when I was six or seven years old.  He taught me that I was unique; there was no one else in this world like me and that was just fine.  He taught me to always follow the Golden Rule and treat others the same way that I would like to be treated.  He taught me how to be a good friend and care about others.  He taught me about how to share and express my feelings, even when things were scary.

He spoke slowly and deliberately so that children could understand and comprehend his message.  He introduced me a world that was safe and free of scary, hurtful things.  He showed me how to play fair, share, and follow the rules.  He introduced me to ideas like asking how things worked, how to be curious about the world around me and encouraged me to seek discovery on my own.  He taught me the power of my own imagination. And above all, he set a great example of how to be a good person.  A good neighbor.

He praised us, told us he was proud of us and encouraged us to be ourselves.  He provided a safe haven and gentle reminder that there still is good in the world.

I know that there are Mr. Rogers naysayers out there because I have heard the comments in the past.
"Mr. Rogers was weird. Strange.  Unbelievable. Too innocent or wholesome. "

To them, I say...Is it so strange that a person could be genuinely happy and gentle in their personality?  And how sad that others think it weird?  Yes, he was innocent and very wholesome.  But aren't our children also innocent and wholesome?  What would be so wrong with them spending their TV time with a person that was able to connect to their innocence?  Wouldn't you rather your child hang on to that as long as they can?  I think Mr. Rogers provided the exact emotional nurturing that children needed.  He gave us security, acceptance and self pride.

I think Fred Rogers is exactly what we are missing today.  Maybe if we had more people like Mr. Rogers, children would be going outside to play instead of sitting in front of a screen for 3-4 hours a day.  Maybe if we had more role models like him, we wouldn't see such an increase in social problems in our children. Maybe if we all tried a little harder to lead a good example like Mr. Rogers and praise our children for the good and encourage them, we would see a positive affect on our society as a whole.

Our children are growing up way too fast.  And when I say that I don't mean they are growing up too fast as in days, I mean as in becoming more apathetic, resistant to simpler things in life and becoming miniature adults too soon.  Too often do we see 10 year olds dressing and acting like they are 16.  Too often do I hear a 7 year old say something such as action figures and dolls are "for babies."  When did having your own phone, computer or Facebook account at 9 become the norm?

We have got to slow down with all of this because if we don't, we are just exchanging our childhood innocence for Uncle Grandpa and SpongeBob.  I don't know about you, but I would much rather my kids have the values and respect that Mr. Rogers demonstrated than the screaming, disrespectful idiots that we invite into our living rooms every day.

I think we should all try to remember the lessons and values of Mr. Rogers and we should be passing those onto our own children.  The challenge to myself and to others:

1.  Think before you speak to a child.
2.  Be deliberate in your message.
3.  Provide encouragement.
4.  BE a good role model.
5.  Listen to them.  Talk to them.  Ask them about their day.  Ask them what was their favorite part or a part that wasn't so fun.
6.  Tell them you are proud of them.  Even if it's that you are proud that they used good manners or did a chore without being told, give them something to be proud of every day.
7.  Encourage them to use their imagination.  This may require unplugging them from the screen for a while but imagination and play is how young children learn about the world.  They need it.
8.  Encourage them to self monitor their own behavior and feelings.  Teach them to follow the Golden Rule.
9.  Teach them what it means to be respectful and kind.
10.  Show them how they are part of a global community beyond their own doorstep.  Show them how kindness within the community helps other people.  Teach them to share kindness.
11.  Provide them with responsibility.  Children of all ages can participate in helping others.  They can help empty the trash, pick up their toys, or feed the dog.

I think if we all tried a little harder to take a more deliberate approach to interacting with children, like Mr. Rogers did, we could see huge changes in our society and communities...maybe even our neighborhoods. 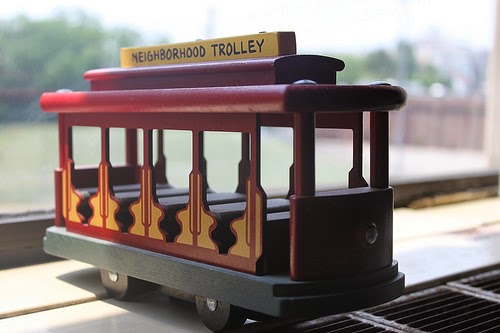 "We live in a world in which we need to share responsibility. It's easy to say, 'It's not my child, not my community, not my world, not my problem.' Then there are those who see the need and respond. I consider those people my heroes."
—Fred Rogers, 1994
quoted in his obituary in the Pittsburgh Post-Gazette