Turning into the Skid 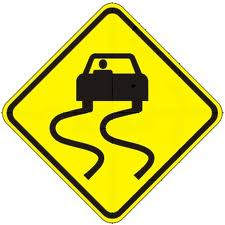 Lately it seems that things have been a little out of control. A little off kilter.

There has been sudden illness, a death in the family, childhood sickness that got a little scary and frustrating and some sensitive, flared tempers. Not to mention the severe cabin fever going on due the damn Polar Vortex that has hit the Midwest.

Ironic, because when I think of the word 'vortex', all I can think of is something that sucks. And that's exactly what 2014 has done so far. Sucked.

Actually, Webster's defines a vortex as such:  vor·tex  noun \ˈvȯr-ˌteks\ : a mass of spinning air, liquid, etc., that pulls things into its center: a whirlpool or whirlwind.

Interesting.  Since the last two months have been a total whirlwind of a shit storm.

There are the good days when it feels like I'm speeding down the highway with the windows rolled down, music blaring and the sun shining down on me, all is well.  And then suddenly...the clouds roll in, I'm in a terrible ice storm and hit a patch of ice that sends me sailing down the road at 70 miles per hour.

I have two choices.  I can either a) succumb to what is called "target fixation" which is focusing on the impending doom to the point that you are utterly helpless to take action to correct the situation, which ultimately will result in a crash or I can b) turn into the skid.  I am a chronically positive person by nature, so I choose b.  I turn into the skid.

In fact, my entire life has been learning to avert the crash and burn.  I have learned sooner than most that sometimes you have to go against what feels natural and turn directly into the very thing that may scare you the most.

Losing control can be terrifying.  In fact, it can feel debilitating.  We all have those moments in life.  Feeling completely helpless and hopeless in our situation.  But how do you turn into the skid and avoid the crash, so to speak?

Keeping a clear perspective of the situation is my version of turning into the skid.  When I feel hopeless and helpless, I try to remember that most situations are not permanent.

And even if something such as a death of a loved one occurs, while the feelings and emotions are real and raw, life will continue to go on.  Every day it will hurt a little less.  The memories are there and the love is not gone.  I truly believe that all experiences in life, good or bad, teach us something valuable.  It might be hard to see it in that moment, but it's there.

So while I am pissed off, depressed about the weather and blue because of the suckiness of the new year, I try to remember that the snow will eventually melt, the sun will rise again, we will get back to a regular schedule some day and the illnesses will pass.  I just have to remember not to focus so much on the negative or I will eventually crash.

I just need to crank that wheel as fast as I can to avoid it.