King of Right and the Kingdom of Wrongville 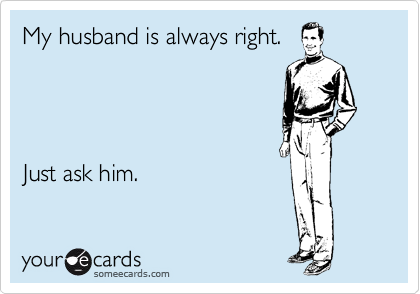 If you know me well, you know that I am highly sarcastic and I can spout off a fictional story in the blink of an eye.  Today this happen between Dalai Dad and I during a funny disagreement over something petty.  In my sarcasm and story-making, we both laughed at the scenario of him being the King of Right and that I was a villager in the Kingdom of Wrongville.  We laughed about it and both decided that it definitely needed to be written.

We respectfully love giving each other a hard time.  We thrive on it and have always enjoyed this constant back-and-forth of teasing each other.  Our dance goes like this:  He dishes out some ridiculous rant of monumental proportions and I oblige in a sarcastic retort.  I shovel out a grandiose exaggeration of what he just said and sprinkle in some smart-assery.  Then we both laugh and agree that we are both friggin awesome.

Dalai Dad has always asserted that not only is he an asshole (his words not mine!), but he is also always right.  This has been an ongoing joke for YEARS.  In fact, I remember one time he actually WAS wrong and admitted it.  So, my smart-assery skills led me to write that one down on the calendar.  But today, it happened again that he was the King of Right and I was, indeed, the villager in the Kingdom of Wrongville.

In addition, Dalai Dad and I can be quite competitive in such instances.  I asserted that the story of the King of Right must end with him learning a valuable lesson but of course, he disagreed.  So I made a bet with him.  We play this stupid puzzle game online and I bet him that he couldn't beat my score.  The deal was if he beat me, the story doesn't end with a lesson learned, but if I won, the King of Right would learn a lesson.  He won so it's gonna be a crappy story.  So here it is:

There once was a King who lived in a castle of Right. He sat upon his throne and looked down onto his subjects of the Kingdom of Wrongville. They looked to him for the answers to everything. For he was, above all else, a purveyor of being right. He knew all, did all and lived in such a way, that he was always right.

The townspeople below him came to him with questions of life; questions of mercy and understanding. He answered their questions and then beckoned they leave at once. When he shooed them away with his royal scepter, his flashy jewels glistened in the light.

While he reveled in the glow of always being right, he grew weary of having to answer all the townspeople's petty, tiresome questions. He longed for something more; something challenging and different.

Then one day the King beckoned for the Royal Advisor to seek a companion for him, a bride.  He wanted someone to keep him company and entertain him.  So, being a loyal subject the Royal Advisor went into the Kingdom of Wrongville and went to every cottage seeking a bride for the King.

After many hours of knocking on doors and talking to townspeople, the Royal Advisor finally asked the local clergyman, "Why is it that no one wants to be the bride to the King?  He has so many things to offer!  This bride would be afforded all the luxuries of the castle!  She would have the best of gowns, the finest jewels and all the riches she could ever imagine!"

To that, the clergyman simply replied, "I am afraid, sir, that the villagers think the King is a jerk."

The Royal Advisor was shocked and amazed at the clergyman's honesty.  He bid him good day and continued in his search.  As the sun was setting, the advisor realized that he would be unsuccessful in his mission to find the King a bride to keep him company and entertain him.  And just as he was unhitching his horse to head back to the castle, the advisor noticed a beautiful young lady.  She was quite breath taking. She had flowing brown hair and a sweet, innocent look about her.  She smiled, carrying a basket of flowers as a small crowd of woodland creatures followed her as she sang and picked more flowers.

The Royal Advisor knew just then that this young lady was perfect!  He approached her and asked her if she would like to become the bride to the King of Right.  She smiled politely and agreed.  Delighted, the Royal Advisor helped her gather her things and took her to the castle at once.

As they entered the castle, the young lady of the Kingdom of Wrongville met the King for the first time.  They talked and laughed and disagreed on many things.  But they liked each other.  And while the young lady was always wrong and the King was always right, the young lady had just enough sarcasm and a great sense of humor that she was happy and the King was entertained.  They spent many days disagreeing and giving each other a hard time.  She entertained the King with her silliness and being wrong all the time.  And the King constantly impressed the young lady with his rightness.  She reminded the King to lighten up every once in a while and on occasion she even threw eggs at him to make him laugh.  Over time the King became a pretty chill dude.  Even though everyone else thought the King of Right was a huge jerk, the young lady thought he was just perfect and in spite of it all, they lived happily ever after.