I feel a little taller today. 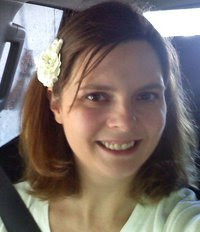 Alas, it is my birthday day and I am now, gulp, 32. Honestly, it's not that bad and it doesn't really bother me. It felt like any other day, really.

I woke up before the alarm went off, which always pisses me off. The children and husband gleefully wished me a happy birthday. Jake made the baby humans breakfast and I took a little longer shower than usual.

The children at school immediately realized it was my birthday and instantly wanted to know how old I was. (They always have this fascination of how old the teacher is.) Of course, I told them I was 100. Thankfully, they didn't believe me. I giggled at their responses and asked, "Don't I look great for my age!!" They roared in laughter.

They kept asking and wouldn't let it go, so I asked how old did they think I was? (Loaded question, I know.) The initial responses were positive though. A little girl shouts out 29! I spun around and gave her the game show pointed finger and said, "We'll go with that one!" Just then another student said I must be around 23. My smile grew as I made a mental note to make that little darling my new favorite. Then, some hellion said I was definitely 40. I made a mental note that he was now my least favorite.

After the conversation died down a little, ( I never did tell them I was 32) someone asked if I felt any different today. Too cute, since you know that someone has probably asked him that on his birthday. I answered that, no, I didn't feel any different. He looked serious for a moment and then said, "Well, I think you look.....taller."

The rest of the day was a battle and felt as if it would never end. They were beasts today and even the fact that it was birthday wasn't enough to get Problem Child to behave.

We did, however, write letters to Santa today, which was adorable by the way. I saw somewhere that Macy's is donating money to Make a Wish foundation for all the letters dropped off at their stores. Since Ivan is a Make a Wish recipient, I thought what better way to support the cause.

I found some cutesy paper and told the kids we would write a letter to Santa. First of all, they were so stoked. We talked about what types of stuff to put in the letter, like if they have been good, what they want, (but not too much because you don't want to sound greedy), whether or not they will leave cookies and such. One letter that I read said "Santa I will leve you sum cokies and mill. P.S. Don't spil the mill." That means milk. How cute is that!? This is why I love my job. Even Problem Child's letter made me smile, he wants a iPad, DSi, a gun and a car. Eeeeeeeerrrrrrt. Wait. A GUN!?!! I said, "Whoa, a gun. What do you need a gun for????" in a scared teacher kind of way. "Just a bb gun," he said. Breathe sigh of relief, whew. Still, Problem Child does not need a bb gun. Do you hear me Santa? HE DOES NOT NEED A GUN!!

After school, we had a staff meeting, which was short and sweet so I was happy. We congregated in my room afterwords taking funny pictures for our school Christmas card to send to other schools in our district.

Ivan's Christmas program was also tonight and pretty uneventful. Yesterday, I realized we had so much stuff going on and commented about how it was birthday, I had a staff meeting and the Christmas program. Ivan's response, "Well, I only sing one song. Do we HAVE to go, Mom?" He is not exactly the performing type. However, we went and had a good time. He actually sang the song and did the choreography that accompanied it. Proud and surprised as I was, I got to use my new FLIP camera. Yay!

We went out for dinner, had some cake and played before bed. I must say that I do feel a little taller today and 32 really isn't so bad after all.