Elf on the Shelf

I have been hearing about this Elf on the Shelf from co workers at school for the last two weeks, so I decided that we should try this little Christmas trickery with our own children. It sounded like a cute idea and a way to keep the kids motivated to be good from now until Christmas. I did some searching of the internets ( yes I said internets) and found that one could find the elf at most Hallmark stores.

So over the weekend, I went in search of an elf. I went to our local Hallmark and they were out but I was in luck because a cute, little, over-priced kids boutique in the shopping plaza also sold them. I don't understand how I missed the huge window display of elves as I drove by, but I did. After forking out $30 for an elf and book, I started plotting. 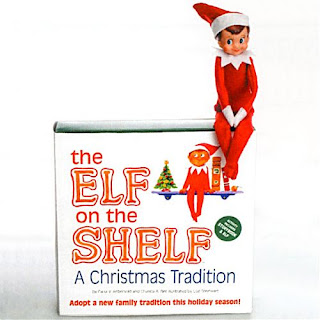 How was I going to present the elf? Beacause you know, presentation IS everything! I really wanted to introduce the idea Sunday night, to avoid the Monday morning rush and trying to read, explain and answer questions about this mysterious elf in our house. After talking to my mom, we came up with an idea. I would wrap the box in a paper and place it on the front step. In the mean time, I would have the children go upstairs to clean their room. ( Good ploy on both parts, kill two birds with one elf, right?) Jake would call up to them to come downstairs as I rang the door bell and bolt to the couch, where I would pretend to be vegging out. (Easy enough to believe, really.)

The plan worked and as I "answered" the door to see who was there, Ivan came to see also. I looked curiously around and "noticed" the package on the steps. "Who could this be from?" I asked. Ivan is beginning to read, so with gusto he read "Santa, Santa's Workshop, North Pole. It's from SANTA!?!"


Luci quickly jumped to the window to see if she could see him. Much to her avail, he was already gone. We quickly opened the package and found the elf and the book. I read the book, which explains that the elf is Santa's helper that has magic powers and flies back to the North Pole every night to report back to Santa about how the children have been behaving. The book explained that every morning he will return and we will have to find him hiding in the house somewhere.

**The catch- he is magic, so we can not touch him or he will loose his magic powers and won't be able to return to the North Pole to report to Santa.


For the full details : http://www.elfontheshelf.com/

We also had to quickly name him, because his magic powers will not work until he is named. After much discussion, confusion and contemplation, the children named him Bob. So Bob sat on top of the China cabinet last night.


While Luci was thoroughly enchanted and amused by the whole thing, I got the feeling that Ivan wasn't buying it. As they went to bed, Ivan asked a ton of questions, which continued tonight at bedtime. While he was the first one up this morning and looking for Bob, he still isn't buying it. This was tonight's conversation:

Ivan- "Mommy, when you put him on the China cabinet, what did he feel like? Was he like a plastic toy?"


Ivan- "Was his face plastic feeling? I think it's just a toy. "


Me- "Well, I thought he felt soft, warm and tingley and sometimes you have to believe. Please, don't talk too loud or he will tell Santa that you don't believe!


Me- "Well, then, how did he get here? Where did he come from? How did he move to another spot this morning?"


Ivan- "He came from the North Pole! And I think you moved him last night!"


Me- "Well, I know that I didn't move him and Daddy didn't either and so I believe that he is a magic elf. You can believe whatever you want. Goodnight!"

Now, my problem, you can see is that I have a highly logical child that has always been taught that there are no monsters, that things happen for a reason and there is an explanation for everything. Seems that backfired on me, didn't it??
Posted by Heather