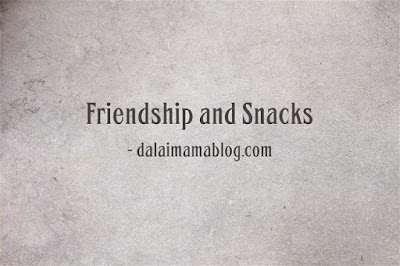 We're not a sports family.  So when it's Super Bowl Sunday, it's just like any other Sunday at our house.

But in the off-chance that we do go to a Super Bowl party, please note, I'm only there for the friends and the snacks.

Which got me thinking today...
You can pretty much size-up what type of friend someone is based on what snacks they bring to the party.  Allow me to elaborate.

The Stale Chip Friend
This friend is about the lowest on the ladder because they don't put any effort into the snacks.  They are probably running late and showed up with a bag of stale chips.  They might even have a chip-clip on them already.  This just says "I didn't care enough about this event to go to the store and find something.  I just grabbed these half-eaten chips from my cabinet and drove over."  The fact that they didn't put any effort into the snack probably means they won't put much effort into your friendship either.  Steer clear of Stale Chip friends.  You don't need them in your life.

The Shows-Up-Empty-Handed Friend
More than likely, this person isn't really a friend.  Maybe an acquaintance or co-worker?  They might have just found out about the party and wasn't sure of the snack etiquette.  Either way, this friend probably won't be playing a vital role in your life, so I would just not worry about them and move on.

The Healthy Snack Friend
This friend has the best intentions and is really trying to be a good friend.  More than likely, they are currently on some kind of eating plan and they might secretly want to recruit you into their eating habits.  Or maybe they are just worried that they won't find anything that they can eat at your party so why not bring their own snacks?  Or maybe they are thinking about all the unhealthy snacks that will likely be at the party and they are being sensible by bringing something healthy. Either way, this friend is also worth keeping, as long as they aren't getting on your nerves about you joining their paleo/keto/fasting/Whole whatever diet.

The Crockpot Friend
A word of advice...if you find a Crockpot Friend, never let them go!  They are a rare find and worth having as a good friend.  I would venture to say, a BEST FRIEND.  The Crockpot Friend not only planned a snack (or meal) ahead of time, but probably spent a significant amount of time going to the store to gather ingredients, preparing the food, and letting it cook all day.  Not to mention, the time and effort to lug a damn crockpot out the door, in the car, and to a party.  The Crockpot friend values your friendship and will stick by your side through thick and thin.  They are willing to put in extra effort in your friendship and go out of their way to help a friend. Not only do they make a nice food display at your party but the Crockpot friends are also the friends that more than likely stay and help you clean up after the party.  They are the last ones to leave and make sure that all the dishes are done and garbage taken out before everyone leaves.  I'll say it again, NEVER LET A CROCKPOT FRIEND GO!

There you have it...the different types of friends based on what snacks they bring to the party.  Are there any that you would add?
Posted by Dalai Mama