Target: Say Something, I'm Giving Up on You


﻿
Before I begin the upcoming rant, I wanted to share the different working titles that I came up with as I was thinking about and writing this next post.  The list is as follows:

Target Strips Away the Magic of Christmas

Relationship Status with Target: It's Complicated

How Target's Corporate Greed Ruined Christmas Magic for My Son

Let me begin in saying that Target and I have been in a semi-serious relationship for years now.  We have shared many good times, great laughs and funny stories. Hell, I have provided Target with a vast amount of free advertising just based on my blog posts about conversations I have overheard in Target.

I have generated interest for their store with my many funny tales of Target adventures.  Not to mention that I have provided free advertising, targeting the male population of shoppers in my post about picking up female prostitutes in the lingerie section.   That alone should get me a free Starbucks or something!  But alas, Target has gone and done it.  They have exceeded the maximum capacity of my patience with them.

Let me say that I am saddened and embarrassed that they have stooped to the level of ruining the 'magic' that is Elf on the Shelf for the monetary profits that this product generates.

I will be the first to say that four years ago, when I first heard of Elf on the Shelf I was excited about the idea and I thought it was a darling family tradition.  I ran straight out and bought an Elf with the book.  At that time, the only place you could find the Elf was at small boutiques and specialty stores.  So after some searching, I found one.  I planned an elaborate entrance for our elf.  He would arrived wrapped in Christmas paper, dropped on our doorstep by none other than Santa himself!  It was a wonderful introduction that went off without a hitch!  The kids loved it, they bought it and so the tradition began.

I will admit that the Elf actually became more of a pain in the ass than I had originally thought, but it was a tradition, nonetheless.  The kids looked forward to it and excitedly awaited his arrival each year...until Target released it's Wish List catalog this year.

Two days ago, Ivan asked for some magazines that he could use to make a "All About Me" collage for Cub Scouts.  I gave him a few old magazines and the Target Holiday Wish List catalog to use. 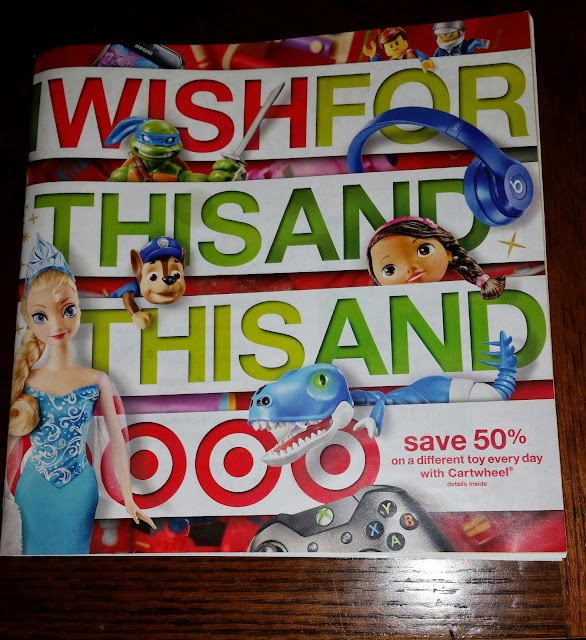 "There might be some good pictures of Legos or action figures that you like in there buddy."  I said, not knowing what was housed in the seemingly innocent toy catalog.

Fast forward to the next day, as I was walking in the door from a long day at work, I went to hang up my coat.  Ivan was sitting contently at the table working on his collage, flipping through the pages of the Target Wish List catalog.  As I closed the door to the coat closet, Ivan shouted "MOM!"

As I spun around to see what was causing such alarm in his voice, he yelled, "THE ELF ON THE SHELF DOESN'T COME FROM THE NORTH POLE OR SANTA! IT COMES FROM TARGET!"

My heart immediately dropped into my stomach as I looked down to see the Target Wish List catalog sitting on the table with the Elf on the Shelf ad in the bottom corner, right next to the other books and videos.  Sonofabitch! 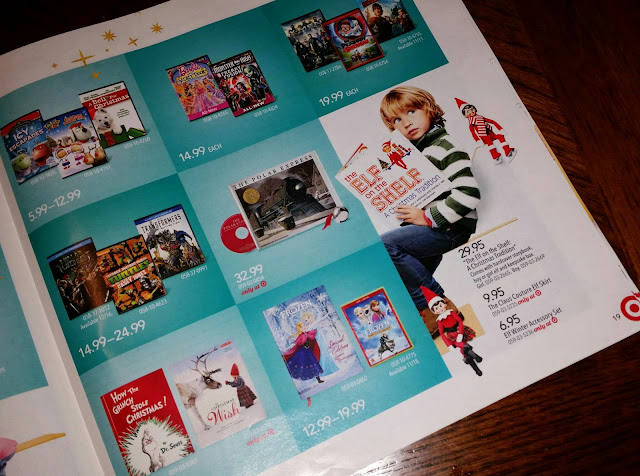 My head spun trying to come up with an explanation, an excuse.  I had nothing.  It was obvious that the delay in my reaction was proof enough that the Elf had indeed, not come the North Pole.  "Don't tell your sister,"  is all I could come up with.

As he slumped in his chair and pounded his fist on the table in disgust, I felt equally disgusted with the marketing genius that decided that it would be a good idea to put the Elf on the Shelf product right in the catalog that children look at to make a Christmas wish list!  What in the world were they thinking!?

If you are familiar with the story of the Elf on the Shelf, the book states that he comes from Santa himself and he returns to the North Pole each night to report to Santa.  Obviously, this marketing employee hasn't read the book or isn't familiar with the tradition enough to know that the book and Elf don't come from a store!  They come from Santa!

Last year, I let it slide when Target put up a huge end-cap display of Elf on the Shelf directly across the isle from the toy section.  As I coaxed my kids in another direction, hoping that they didn't see the display, I sneered a little at the cluelessness of the location of the display.  Obviously, they don't realize that the Elf is supposed to be a "secret magical Elf from the North Pole."  In fact, we shouldn't even be talking about him because that, in fact, makes him lose his magic!

I know it's not the end of the world and my kids still believe in Santa, but I was a little disappointed in Target for not being more sensitive to the audience that they target with their Wish List catalog.  I would have thought that they could exclude the Elf on the Shelf from the toy catalog as not to place any doubts as to the magic that is Elf on the Shelf.

Maybe I shouldn't be mad at Target.  Maybe I should be mad at the publisher or author of the book, after all, they partnered with Target to be a distributor, right?

Maybe I should be upset with myself for not previewing the catalog first.

Maybe I should just be upset with the fact that my son is getting old enough that he is going to be figuring these things out sooner or later.  Maybe I'm not mad at Target but rather the fact that my boy is growing up too darn fast.

Hopefully, Target and I can get past this little rough patch. After all, we've been through so much together.  I think for right now, I just need some time to think and be alone for a while.  Maybe after the holidays we can reconvene and hash things out.


P.S.  If you would like to hear more about my funny, Target shopping episodes read :

Prostitutes in Target:  The Time I Overheard a Craigslist Connection in Target

Blogher Featured :  A For-Real Conversation that I Heard in Target

Blogher Featured :  Christmas Brings Out All the Amateurs

My sister-in-law's attempt/fail at being a professional Target shopper. :  Amateurs Step Aside: A Target Story