It Could Be Worse

*This article was originally featured at Brain, Child Magazine. 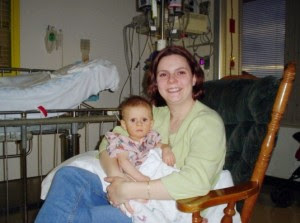 I repeated those words in my own mind for months leading up to the heartbreaking news that I had just received.

My baby, my first born, my son was in desperate need of another open heart surgery.  Except this time, his fragile, tiny heart needed a titanium valve to save his life.

His increasing need to be by me, with me, on me all day long seemed different.  He cried for me; to be in my lap, to rock in the chair and to sleep in my arms.  I wearily complied through exhausted eyes and rocked, cuddled and cried wondering what was wrong with my baby. I craved for normalcy.  Why did my baby have to be sick?  Why couldn't he be healthy and happy?

As we went to the doctor's office, I hoped and prayed that they would have answers for me.  With a glimmer of hope, we stepped into the waiting room.  I held him in my lap for the fear that if I put him down he would begin to cry inconsolably again.  As I held him, I looked around the waiting area at the pictures hanging on the wall; gleaming smiles of other little children that this doctor had saved.  Some of them obviously had other health issues, not just heart problems.  I sighed.

The friendly nurse called his name and we went into the examining room.  After hours of tests, multiple doctors, and nurses rushing hurriedly around me, they told me the news.  "He is experiencing Congestive Heart Failure."

Failure.  Funny choice of words, because that was exactly what I was feeling at that moment.  My baby was suffering, hurting, dying and I was powerless to fix it.  I felt completely out of control and had no way to help the situation.  I fought back the tears as they admitted him immediately to the Children's Hospital.

The next few days were a total surreal experience as they tested, poked, x-rayed, and prodded my eight month old baby.  I sat on the sidelines, nodding and smiling; trying to understand all the medical jargon that they were throwing at me.

"Uh-huh. Ok. Mmmhmmm."  Whatever, doc.  Just fix my baby, ok?  Make him be normal.  Make him laugh again.  Let him grow up to be a happy, healthy boy that can live and love like he deserves.

"Luckily, he has a pretty good chance at living a full healthy life after all this.  It could really be worse." they said.

Turns out they were right.  It could be worse.  And in the days following his surgery, I met worse.  While my baby came through surgery with flying colors, I saw many other children on the pediatric floor that didn't.

While spending the next nine days in PICU, I met quite a few other parents that were equally as weary as me.  While our dreary eyes met across the hall, we gave a polite smile or sometimes a glazed stare.

We knew what the other was going through; thinking.

We knew the feeling.

We knew that dread that we faced every time we returned from the bathroom, the cafeteria, or the vending machine for lunch.  That dread that hits you in the gut when there are three doctors standing in the room.

What's wrong?  Why are they all in there?  What happened in the five minutes I was gone?

Oh, nothing?  Just some residents doing their rounds?  Ok, good, let me just take a moment because I think I stopped breathing for a minute there.

While spending those days on the PICU, I couldn't help but notice that it could be worse.  While my guy was getting better each day, breathing on his own, eating, sitting up, and playing with toys; others were not.

While they removed lines and tubes from my baby, others were being wheeled down the hallway for more tests.

While the medicine drips slowly disappeared in our room, they popped up in the neighbors' rooms.

While I was finally able to hold my fragile baby again, other mothers' arms were empty.

As the days passed, I met a mom whose baby had been in PICU for months.  Her son was sedated and hooked up to so many machines, I lost count after about ten.  As we chatted here and there, we became friendly and I found out that her baby was born with gastroschisis, which is a congenital condition in which the baby is born with the intestines on the outside of the body.  Her little boy had underwent several surgeries to repair it and they were still trying to fix him.

As we exchanged glances through the window that separated our children's PICU rooms, I felt for her.  I felt guilty and selfish because I was cursing nature and God for making my baby suffer.  Meanwhile, this mother was feeling the exhaustion and anguish of her own struggles.

One day, as we were chatting, she told me how her husband had to stay in their hometown, which was about 100 miles away, because they couldn't afford for both of them to miss work.  He would visit on the weekends and she would stay in the hospital with the baby.

I felt lucky because we had the luxury of living within driving distance of the Children's Hospital.  My husband and I were able to see our baby every day.  My heart sank for her, having to face all this hardship alone without her husband by her side.

Although, as we talked more, I realized how upbeat she was considering her situation.  She seemed so positive and optimistic.

During the course of a conversation, she looked to me and then her eyes motioned to the room across the hall.  There was a flurry of activity going on in there, with doctors and nurses rushing in and out;  family members crying and holding one another.

She said to me, "You know, this kind of stuff really gives you some life perspective.  You know, how you think you got it bad and then you see others like that." She motioned again across the hall with a nod of her head.  "It could be worse."